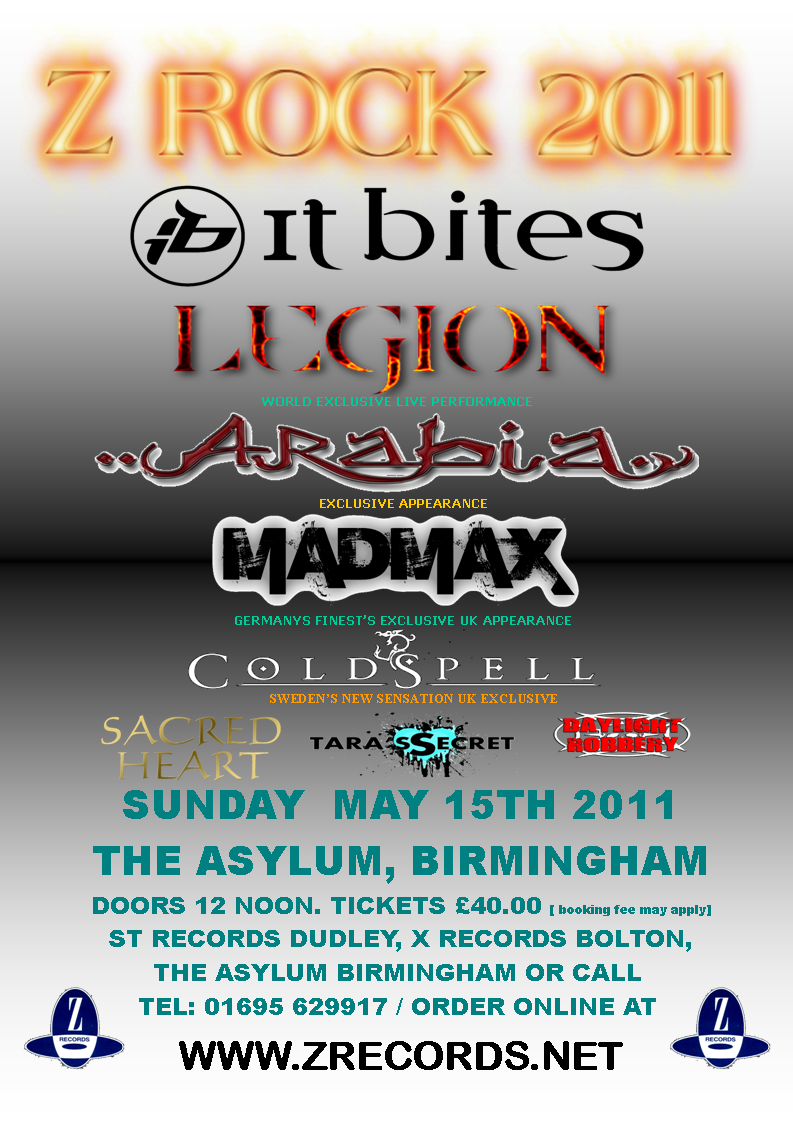 Tickets are still remaining and can be purchased for £40 advance [£45 on day] online at  http://zrecords.webs.com/apps/webstore/products/show/1928536                 until 11:59pm on May 12th or in Person at ST Records Dudley, The Asylum Birmingham or X Records Bolton until                                                                                                 12 noon on May 14th For credit card orders call TEL 01384 230726 or for further information
tel:  +44 [0]1695 629917 or email rockrockprod@yahoo.co.uk
The Merch stall will be present with all Z Records new releases including Steele “Tricks Up My Sleeve” and
hopefully Arabia’s all new Welcome To The Freakshow available for the first time anywhere.
Our special  5 cd’s for £40 and the recession beating 10 cds for £70 offers will be available on the day also.
The revised Schedule is now ……………….
Door 12 noon
playback: PAUL SABU – CALL OF THE WILD
12:45pm – 1:15pm DAYLIGHT ROBBERY the band are a highly melodic English outfit, with a great new album which is currently under production essential for Firehouse and Dokken fans
playback:  STEELE – TRICKS UP MY SLEEVE
1:35pm – 2:15pm  SACRED HEART the band have a new album underway and return after their appearance at Z Rock 2007
playback  LEGION – CODE OF HONOUR + LEGION SIGNING SESSION AT MERCH BOOTH
2:35pm – 3:15pm  TARA’S SECRET having already attracted a fair bit of attention over the past few years we thought it was time Tara’s Secret played at Z Rock
playback: ARABIA –  WELCOME TO THE FREAKSHOW + ARABIA SIGNING SESSION AT MERCH BOOTH
3:40pm – 4:40pm   COLDSPELL Sweden’s hottest new sensation, UK Exclusive
EXCLUSIVE FIRST EVER PLAYBACK OF THE FORTHCOMING OMEGA DEBUT IN FULL
1 HOUR BREAK TO ENABLE PEOPLE TO EAT
5:40pm – 6:40pm    MAD MAX featuring Michael Voss [Casanova]  this will be Mad Max’s first UK appearance in  what we think is 25 years!
ANNOUNCEMENT RE Z ROCK 2012 LINE UP
playback: PAUL SABU – CALL OF THE WILD
7:05pm – 8:05pm    ARABIAit’s nearly 10 years to the day since Arabia’s last UK appearance, a new album is out June 4th but we hope to have copies  available at this years show!
playback:  STEELE – TRICKS UP MY SLEEVE
8:20pm – 9:20pm   LEGION the bands debut live performance, with a critically acclaimed debut and the all new Code of Honour being released on April 4th all eyes will be on Legion.
playback: ARABIA –  WELCOME TO THE FREAKSHOW
9:45pm – til close  IT BITEShighly regarded by many as one of England’s best rock acts, IT BITES add a different twist to the days events, if you haven’t seen them live make sure you do
WWW.ZRECORDS.NET 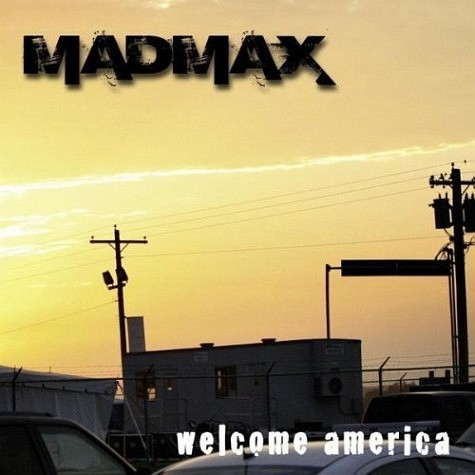 just wanted to let you know that the new Mad Max album Welcome America is released. The title was chosen because of the warm welcome we received when we played at the 2009 Rocklahoma fest.

Though you may haven’t heard from me in a little while it’s because I’ve been very busy, just the same.
If you allow me an overview of what’s been going on:
Yesterday news came in:
MAD MAX Confirmed For Germany’s WACKEN OPEN AIR Festival

German melodic rockers MAD MAX have been confirmed for this year’s edition of the Wacken Open Air festival, set to take place August 5-7, 2010 in Wacken, Germany.

I’ll also be playing the Firefest in Brittain in Octobre aswell as the Z-rock fest.
Tommorow is the  cd – release party for Wicked Temptation whose debut album “Seeing Ain’t Believing ” I recorded over the course of last summer and autumn. The album is already going through the grapevine on Melodicrock.com for weeks, we’re very happy to say. Moreover, the album will be distributed by Sony Records. Nice one 🙂
But there is more to ventilate:
Last December my very first band Chinawhite released their 3rd studio album called “Challenges” which I recorded over the course of the last 2 years. It is published and distributed through our own label called Rock Company.
With Cooper Inc. we released last octobre our 2nd studio album called “Pulling the Trigger” brought to the public by CTM and Point Music.
Two weeks ago I recorded the drumtracks for  ex- Accept singer David Reece’s Bangalore Choir new album, which is yet to be titled and finished. However, it is expected to be released soon through Georg Siegl’s Metal Heaven. Melodicrock.com is spreading news about this one, too.
A week ago my website www.hansintzandt.nl  was entirely facelifted. Please check in and have a look around!
Soon my own recording studio in my house will be up and running with a big live room flooded in daylight of 7x7x3 mtr.  and a protools rig.
When I’m not giging or recording I teach drums at the Drummers Institute in Düsseldorf, reportedly one of the finest schools in Europe as well as at my own school, The Rhythm Syndicate. On top of that I father as of recently twó sons 🙂
On my website and my myspace site: www.myspace.com/hansintzandt you’ll find an overview of my working dates.
Hope to meet and reacqaint at the Frankfurt Messe.
All my best,
Hans in ‘t Zandt
www.myspace.com/hansintzandt
www.hansintzandt.nl
www.cooperinc-music.com
www.parris.nl
www.myspace.com/madmaxmusic
www.myspace.com/piledrivergermany
www.stevefister.com
www.wicked-temptation.de
www.reecerocks.com
www.drummers-institute.com
www.chinawhite.nl
www.rockcompany.nl
Posted in News | Tagged mad max, wacken | Leave a comment

Also the upcoming release of Chinawhite – Challenges is featured.  Listen to it on Myspace.

On the Rockeyez website you can read a report of my trip with Mad Max to Rocklahoma!

…Upcoming European tour with Mad Max is in the making. Expect us in your neighbourhood around June! I will be using my old Stratovaius red double fade Ayotte set with my 22″ by 19″ bass drum 😉 …